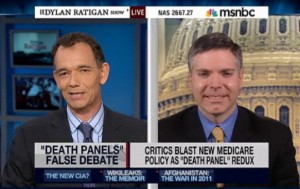 Not content with cliché year-end wrap pieces, the voracious political media machine has resorted to reanimating the rotting corpses of memes past. Now, not only do we now have to avoid the stumbling, vacant groans of “Brains!” from Birther queen Orly Taitz, MSNBC’s The Dylan Ratigan Show has also thrust open the cemetery gates for “Death Panels.”

Using a report from Newsmax (Newsmax!) as its impetus, a panel that includes Jonathan Alter, Jane Hamsher, and Matt Lewis kicks the Death Panels around for awhile, but fails to deliver the requisite double-tap.

The treatment of the Death Panels in this clip is emblematic of what was always wrong with the way the media treated this story. Instead of simply reporting that former Alaska Governor Sarah Palin had gone nuts and accused the President of trying to kill her baby, they said, “Let’s talk about this, nice and fair-like.”

Toward the end of the segment, you can hear Jane Hamsher trying to get in there to do anchor Matt Miller‘s job, but the clock runs out. Luckily, I’ve got all day. From MSNBC’s The Dylan Ratigan Show:

What you hear there is Jane trying to point out to (my friend and former co-worker) Matt Lewis that the world he fancifully imagines under “Obamacare,” one where people are denied liver transplants because they drink too much, is already here. While Matt and Sarah call them “Death Panels,” the pros call ’em “Transplant Committees.”

Of course, the similarities between Palin’s “nightmare” and the private insurance reality is more than a wispy analogy. Both sides of the health care debate under-report the degree to which our current system relies on federal guidelines, and in turn, the degree to which those federal guidelines are drawn from the same pool of research that everyone uses.  In fact, the current problems with Arizona’s transplant denials stem from the fact that they deviate from accepted medical knowledge.

The debate over “rationing” really boils down to which bureaucracy you’d rather have making the decisions: a private insurance company, or the government. Granted, neither is particularly appealing, but it should be an easy choice. The two are identical in every respect, save two things: profit, and accountability. Built into every decision insurance companies make is the absolute need to make a profit, and to that end, those profits are used to lobby for as little accountability as possible. On that score, the Republican plan is an absolute dream for insurance companies, allowing them to sell insurance anywhere, while basing themselves in the state with the weakest regulations.

The government, on the other hand, may have a similar desire to cut costs, but without the added pressure to make a profit, and with the accountability that’s delivered at the ballot box.

There are other reasons to oppose national health care, or single payer, but the “rationing” argument is not one of them. That argument will never cut more deeply than it does against private insurance companies.

More insidious, however, is Lewis’ participation in an effort to backstop Palin’s “Death Panel” idiocy that has been going on since days after she made her pronouncement. Now, conservatives will tell you that she wasn’t talking about end of life care at all, but rather, this faulty rationing argument.

Palin herself, though, belies that notion. When the world rightly guffawed at her misreading of Section 1233 of the House health care bill, Palin expanded her argument to encompass an equally stupid misreading of an article co-authored by Zeke Emanuel, but still rested the lion’s share of her panic on Section 1233.

That meager, ineffectual deflection was suspiciously absent from Palin’s Facebook soapbox until after former House Speaker Newt Gingrich criticized her for not including it. Unfortunately for Newt, he wasn’t hiding behind a social networking firewall when he brought it up, and George Stephanopoulos torpedoed him with the simple phrase “It’s not in the bill.” From ABC News:

Still, the real villain here is the mainstream media, and their fetish for faux fairness. In the days following Palin’s initial “Death Panel” brain fart, people like WaPo’s Charles Lane and Eugene Robinson lent partial, but completely unwarranted, credence to Palin’s argument, setting the stage for the “he said, she said” coverage to follow.

Well, Death Panelers (a badass name for an interior decorating crew, btw), consider this your double-tap.