Debates Offer Opportunity to Do Something Extraordinarily Generous — Here’s How

Debates Offer Opportunity to Do Something Extraordinarily Generous — Here’s How 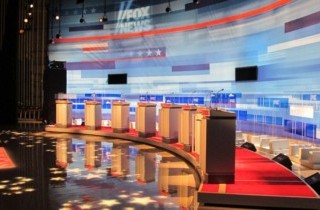 Exhibit A for today is the GOP Presidential debate on Fox News, which will be the television event of the summer if the early predictions and ubiquitous buzz is any indication. And with such a large audience comes the opportunity to do something good, something altruistic, something unexpected.

As you’ll see with the huge debate stage this evening, the background will be the primarily perfunctory blue. It will also be mostly blank. If you haven’t noticed, blue is a common color in the cable news business, and rightly so. Most backgrounds regardless of network are draped in it. Why? Because it’s the color of the sky, a color our eyes are most naturally comfortable with and therefore doesn’t distract from the subject or subjects on screen. Study Fox, MSNBC and CNN in particular…blue rules the day in a subtle way.

But with that blue could be a few moderately-sized, strategically-placed advertisements. No…not for any business…but for a charity. In tonight’s case hypothetically, the RNC and/or Fox could decide on that charity, but they’d probably easily agree on St. Jude Research Hospital, which is a children’s treatment and research center with a focus on children’s catastrophic diseases, particularly cancer.

According to St. Jude’s, “treatments invented at St. Jude have helped push the overall childhood cancer survival rate from 20% to more than 80% since it opened more than 50 years ago.” If that isn’t worth taking a one-minute break during the event to ask for donations via a read by Bret Baier–whose son was born with five congenital heart defects eight years ago and knows all too well what it means to take care of a sick child–I’m not sure what is (Note: Baier’s son, Paul, is healthy today after complex surgery).

In my case, I look at my daughter (22-months-old, below), our first child, and really get caught up in the pure innocence with just about everything she does. She’s been exceptionally healthy, and that’s something to truly appreciate after witnessing two grown adults (my parents) go through the hell that is radiation and chemotherapy over the past few years. It’s simply unimaginable to think of her having to endure treatment like that and her not to know why she’s in so much pain.

Somebody else enjoys getting paid by the word, apparently #cameron pic.twitter.com/1PmI3msasT

All of that said, why not take advantage of this massive audience–mostly comprised of those concerned about the future of our country (right, left, center, doesn’t matter) and what we as citizens can do to make the lives better for our children. That should start with a display of generosity to those most deserving, those arbitrarily in a battle for their lives in the dawn of life.

And this plea isn’t aimed at the GOP or Fox, either. Every debate–Republican and Democratic…every network carrying them…there will be at least 14 of them combined–should take a breather at the halfway point to donate to this or other worthy charities. It only takes a minute and won’t distract from the stage whatsoever, and most importantly, will likely raise tens of millions in the process.

Sometimes the biggest opportunities to do something truly good to help others is right under our nose. Tonight may be too late, but there are 13 other debates to follow on various networks and forums give us that chance.

Hopefully this idea doesn’t fall under the opportunity missed category. It’s just too easy to organize and execute. Let’s make this happen.