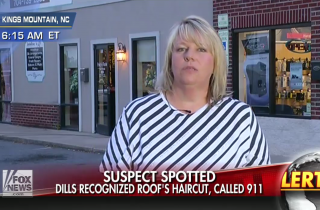 The North Carolina florist who tailed Charleston shooting suspect Dylann Roof’s car, and led police to the accused killer, told Fox & Friends this morning that she credits Fox News for helping her be able to recognize the 21-year-old.

When Debbie Dills drove to work on Thursday morning — through Shelby, N.C. — when she spotted a black Hyundai with Confederate-themed South Carolina plates. Pulling up alongside the vehicle, she noticed a young man with blonde bowl-cut hair, and immediately informed authorities.

How was she able to tell it was him? “Actually, watching Fox News, Fox & Friends yesterday morning,” she told the network. “I had paid close attention the night before when I heard about the church shooting… I don’t know why I paid closer attention — I’m calling it divine intervention. I believe God had a plan in it.”

Dills refused to describe her actions as heroic, telling Fox, “I’m not the hero. God’s the hero he just used me. If we are a willing vessel he can use us but we’ve got to open up our hearts and our minds.”

She continued: “I got a little nervous. I’ll be honest with you I’m not a hero and I’m not brave. I just started talking to the Lord about it and I got off of the exit to come on into Kings Mountain and I started thinking about it and thought what if it really was him. I wasn’t sure it was him and I didn’t want to get anybody else in trouble or be overreacting.”

Watch the interview below, via Fox: