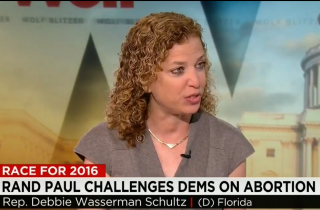 The pair have exchanged a series of jabs over abortion rights since the U.S. Senator from Kentucky announced his Republican presidential candidacy.

Last Wednesday, Sen. Paul challenged the media to ask the Democratic National Committee chairwoman if she thinks “killing a 7-pound baby that’s just not born yet” is okay. Wasserman Schultz replied that she supports a woman’s right to choose and then took stabs at the senator’s recent reputation for feisty interviews with women hosts. A few days later, she continued the battle by telling MSNBC that Sen. Paul’s repeated question about a 7-pound baby was a deflection from the real issues.

And on Tuesday, the DNC chair appeared on CNN’s Wolf and further elaborated upon her beef with the senator:

We have very different definitions of personal liberty. I made that clear in my response the Democratic Party’s position is we are pro-choice. We believe a decision on a woman’s reproductive choices is best left between a woman and her doctor and I am still waiting for Rand Paul to say whether or not he supporting exceptions when a woman is raped, going to force a woman to carry a baby to term and not allow her to make that choice? When she’s the victim of rape, the victim of incest? Are we going to let a woman die? Would Rand Paul let a woman die because she’s carrying a baby or is he going to let mer make that choice with her doctor? We’re waiting on that but Rand Paul’s first day out of the gate as a candidate for president was spent not talking about the issues that matter the most to Americans — the economy, jobs, and helping people reach the middle class — but debating me on abortion.