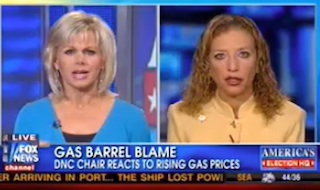 “So I think you felt the President could have done something about lowering the gas prices,” Carlson pressed. “What do you say now that gas prices are going to reach $5 a gallon under President Obama?”

“What I was referring to in that speech, as I have for many years, is that focusing on fossil fuels and continuing the ‘drill baby drill’ strategy that President Obama rightly referred to the other day in south Florida as ‘a bumper sticker, not an energy policy,’ is not the way to go,” Schultz replied. “We are not going to address gas prices over the long-term because there is — there is no President in the short-term that can really change policy and impact gas prices in a significant way. But what we do need to do is over the short-term and long-term make sure that we are using the ‘all of the above’ strategy that President Obama has employed: more domestic energy production than we’ve had in eight years, making sure that we invest for the future in alternative energy like wind and solar and hydroelectric power, so that we can really start to impact our need to depend on…”

“But A lot of Americans are wondering what’s going to happen now and a lot of those things take time,” Carlson shot back.

“I’m sorry, Gretchen,” Schultz said, as the map was shown on the screen. “I can’t see the map here.”

“No, right now there is more…” Schultz began to respond before being cut off.

“Excuse me. Excuse me!” Schultz shot back.

“The policies were enacted by President Bush,” Carlson countered.

“Come on Gretchen!” Schultz interjected. “If you’re going to make a comment, please let me respond. There’s more domestic energy production now than at any time in the last eight years,”

“I’m running out of time,” Carlson replied, moving on to a question about the Keystone Pipeline.

Watch the two go at it below via Fox News: