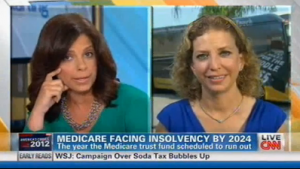 Wasserman Schultz felt that “full embrace of the Ryan budget by actually nominating and selecting its author and architect to be his running mate really spells disaster for the middle class, spells disaster for seniors because Mitt Romney and Paul Ryan both want to end Medicare as we know it. They both want to shred the safety net that is the Medicare health care safety net for seniors that’s been in place for more than 50 years that would add more than $6,000 in premiums under Paul Ryan’s proposal that Mitt Romney has embraced to seniors’ premiums in Medicare and that would really force them choosing between medicine and meals and had them choosing between health care and paying their rent and literally surviving. It’s unacceptable. It’s devastating. And is another clear picture where Mitt Romney stands.”

“Some people might say that last portion right there is where you started getting very dramatic,” O’Brien pointed out, to Wasserman Schultz’s protestations. She also noted that Ryan’s own mother is on Medicare, and that seniors over 55 won’t have their plans impacted.

Wasserman Schultz responded that her parents are also on Medicare and fear that, under Romney and Ryan, their plans will turn into a voucher program.

O’Brien eventually changed the topic to Wasserman Schultz’s recent comments regarding a Super PAC ad involving a the suggestion that a woman’s death from cancer was somehow linked to Romney’s influence at Bain. The DNC chair had said that she had “no idea” what political affiliation the folks at Priorities USA might have

“Soledad,” she responded, “of course I know the Priorities USA Super PAC is a Democratic-affiliated Super PAC. The point I was trying to make was that that ad was produced by a separate organization, and organization that we don’t coordinate with and we have nothing to do with.”