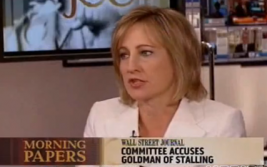 Countless talk show segments, op-ed columns and blog posts in recent weeks have focused on whether President Obama is emoting enough over the oil crisis in the Gulf, and/or whether or not he is angry enough. Former Clinton press secretary (and consultant on the West Wing) Dee Dee Myers thinks it would be risky for Obama to get too angry because…he’s black. Here’s the exchange from Morning Joe today:

Norah O’Donnell: “I was sort of stunned when you just walked in and I said do you think Obama is angry enough and your response was ‘he can’t be angry because he’s black.'”

Dee Dee Myers: “I think that’s hard for him. Anger isn’t the only emotion that would be helpful in this context….I would like Obama to show a little bit more emotion but it doesn’t have to be anger.”

Joe Scarborough noted earlier in the segment that he had assumed that maybe we were beyond this sort of thinking, but “we’re not beyond it.” I have to wonder if this just isn’t another case of the media snake eating its own tail: Obama’s isn’t angry enough, he gets angry (or at least says “ass”) and now the conversation (mostly thanks to Drudge) is ‘is he too angry.” It’s hard not to ponder how much easier Obama’s life would be if the cablesphere didn’t have so many empty hours to fill.

Anyway, as Norah O’Donnell remarked, it was sort of a stunning assertion to make. The President can’t show anger for fear of some sort of angry black man syndrome backlash? I find that both ridiculous and tad offensive. Of course this morning’s Drudge banner suggests (sadly) that she may have a very small point, or at least it suggests it is not in the media’s best interests for Obama to do anything right. Meanwhile, Marc Ambinder shoots down MoDo’s “Spock” description. Video below.