Attorney Mark O’Mara: ‘If George Zimmerman Was Black, He Would Never Have Been Charged With A Crime’ 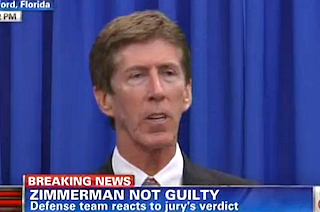 Exactly one hour after his client was acquitted of second degree murder and manslaughter, George Zimmerman’s attorney Mark O’Mara spoke to reporters, one whom asked if he thought this trial would have gone any differently if Zimmerman had been black.

“Things would have been different for George Zimmerman if he was black for this reason: he would never have been charged with a crime,” O’Mara said. “It seems as though what happened was an event that was being looked into by the Sanford Police Department, and quite honestly, as we now know, looked into quite well. I have taken advantage of police departments who have not gone a good investigation of crimes because that’s what I do for a living. When I looked into Sanford Police Department investigation they had done quite a good job.”

“This became a focus for a civil rights event,” O’Mara continued, “which again is a wonderful event to have. But they decided that George Zimmerman would the person who they were to blame and use as a creation of a civil rights violation, none of which was borne out by the facts. The facts that night was not borne out that he acted in a racial way. His history is a non racist.”

“If only those who decided to condemn Mr Zimmerman as quickly and as viciously as they did would have taken just a little bit of time to find out who it was they were condemning, it never would have happened,” O’Mara concluded. “And it certainly wouldn’t have happened if he was black, because those people who decided that they were going to make him the scapegoat would not have.”

Watch the comments below, via CNN: