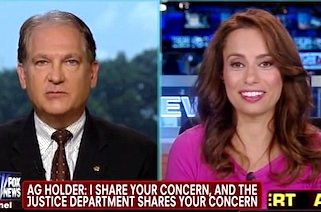 On Fox News Monday afternoon, Democratic political advisor Julie Roginsky eviscerated the mind-boggling claim, now so repeated as to be gospel, that Barack Obama politicized the George Zimmerman case when he addressed it fifteen months ago with the intention of ingniting racial passions. It’s a shibboleth in dire need of refutation, and Roginsky refuted it so well her conservative opponent had to fall back on Benghazi jokes.

As a refresher, here’s what Obama said in March 2012, in response to a question asking him about the racial implications of the shooting:

Well, I’m the head of the executive branch, and the Attorney General reports to me so I’ve got to be careful about my statements to make sure that we’re not impairing any investigation that’s taking place right now.

But obviously, this is a tragedy. I can only imagine what these parents are going through. And when I think about this boy, I think about my own kids. And I think every parent in America should be able to understand why it is absolutely imperative that we investigate every aspect of this, and that everybody pulls together — federal, state and local — to figure out exactly how this tragedy happened.

So I’m glad that not only is the Justice Department looking into it, I understand now that the governor of the state of Florida has formed a task force to investigate what’s taking place. I think all of us have to do some soul searching to figure out how does something like this happen. And that means that examine the laws and the context for what happened, as well as the specifics of the incident.

But my main message is to the parents of Trayvon Martin. If I had a son, he’d look like Trayvon. And I think they are right to expect that all of us as Americans are going to take this with the seriousness it deserves, and that we’re going to get to the bottom of exactly what happened.

Obama clearly delineated himself from the case and the parties involved, did not address the particulars of the actual incident, sympathized with the parents who had lost a son, and specifically mentioned that he was avoiding interfering with the actual legal process; what’s more, except for noting that his hypothetical son would like Trayvon—more an expression of that dreaded concept “empathy” than anything—Obama failed to so much as allude to race (which was the question he’d been asked). The only way you could read the above and decide that he intentionally inserted himself into the process to “inflame passions” over race was if anything and everything Obama says and does sends you into apoplexy.

Cue former Deputy Assistant to George W Bush Brad Blakeman. “He did so without having the facts and circumstances to make the kind of statement the president made,” Blakeman said. “It was in the midst president re-elect, it was in the battleground state of Florida. I don’t think he would have weighed in Massachusetts or Illinois…If anything at the time of the tragedy, he should have asked for calm, and said ‘I have faith in the justice system and stand behind those actions by our law enforcement people and those in the judiciary to bring about the case appropriately.'”

That sounds…a lot like what Obama said. Is there a difference between “having faith in the justice system” and saying it is “absolutely imperative that we investigate every aspect of this, and that everybody pulls together—federal, state and local—to figure out exactly how this tragedy happened”? Isn’t the latter an instance of the former?

Roginsky argued that Obama’s statement was neutral toward the case but sympathetic toward the family of the murdered teen. “When [Obama] is asked about the case, he can say I don’t know what you are talking about, which would be laughable,” she said, noting that Fox News had engaged in “wall to wall” coverage of the case. “Or he could have commented on it. I think he commented on it reasonably. He never said Trayvon Martin was innocent or guilty and never said George Zimmerman is innocent or guilty. He simply commented on the circumstances surrounding what had happened.”

“He gave sympathy in his statement to a party, to Trayvon Martin,” Blakeman insisted.

“And is that wrong?” Roginsky asked, zeroing in on the consequences of Blakeman’s point: does the political polarization of media outlets, in which anything the president says is run through a Fox News-to-Breitbart pipe, mean that Obama can’t express sympathy for the family of a murdered teen, regardless of the circumstances of his death?

Blakeman then resorted to the time-honored Fox News pleonastic tradition of yelling out as many points as loudly and quickly as possible so as to forestall any possibility of a rebuttal, insisting in rapid sentences that Obama somehow didn’t let the process play out, though he couldn’t name specifically or practically how Obama “injected himself” beyond the reasoned statement quoted above.

Host Trace Gallagher cut off Roginsky before she could respond—keep it classy—instead asking Blakeman if he thought Obama had addressed the issue because the president had spoken to Eric Holder on their special phone and had secret knowledge of the case.

Blakeman, who apparently had had the word #BENGHAZI stuck in his teeth the whole segment, spit it out: “Well, apparently he gets all of his information from television,” Blakeman responded. “On Benghazi, on the leaking. So I don’t know where he would have gotten superior knowledge.”

“I’ve known you for a long time, I don’t know what you’re smoking,” Roginsky said. “Why should he have superior knowledge?” When Blakeman responded that Obama had ordered the Justice Department to look into the case, Roginsky dared him to substantiate this allegation. “He did not ask the president to investigate, I don’t know where you made that up from…I have seen no evidence whatsoever of your allegation.”

Blakeman could only respond with the same shadowy suppositions behind the IRS pseudo-scandal and others, in which the fact that a connection isn’t in evidence is all the more proof of the conspiracy necessary to hide it.

Obama spoke four quick paragraphs about Trayvon Martin’s death, once, fifteen months ago. He didn’t mention race, he didn’t address the specifics of the incident, and he didn’t direct any arm of any level of the government to do anything but investigate, which, in truth, is all Blakeman wanted. The only way in which Obama’s comments have had any outsized influence on the case is in conservative outlets, who have repeated their supposedly sinister motives to themselves so much that, to them, the comments have had a profound though entirely self-contained influence. It’s so bad that one tweet following the verdict read, simply: “Self-defense 1, Barack Obama 0.” But that’s just it—no one else is keeping score.