Dem Congressman Gets Thrown Off After Calling Hannity A Liar, Immoral: You’re ‘The Worse Excuse For A Journalist’
video

Dem Congressman Gets Thrown Off After Calling Hannity A Liar, Immoral: You’re ‘The Worse Excuse For A Journalist’ 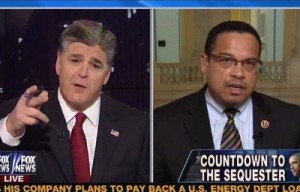 During a particularly contentious interview on Sean Hannity‘s show tonight, Democratic congressman Keith Ellison launched into an angry tirade against the host, accusing him of being “immoral” and a liar. He told Hannity he continuously says things that aren’t true, pointing to his consistently blaming the massive debt on President Obama. Hannity immediately stopped the interview at this point and told Ellison that having him on was a waste of time.

Right at the top of the interview, Ellison told Hannity, “You are the worst excuse for a journalist I’ve ever seen.” He scolded Hannity for trying to blame the president instead of providing accurate information on the sequester fight, and called Hannity a “shill for the Republican party.” Hannity invited Ellison to “keep ranting.”

After Ellison spoke for a bit, Hannity cut him off to ask another question, but Ellison fired back, “No, wait a minute, you said I could rant, and I am.” Hannity said he’s had plenty of time to rant, but before he could get onto the next question, Ellison kept loudly talking. Hannity asked, “Why are you so angry?”

Hannity told Ellison he was acting “comical,” and in response to Ellison’s bewilderment and light mocking, he said he gave him enough time to rant without getting another question. Hannity said that in the spirit of bipartisanship they should have a dialogue. Ellison shot back, “I thought you weren’t a Republican.” Hannity clarified he’s a registered conservative.

Hannity then moved on to his question. He claimed the sequester was the Democrats’ fault, to which Ellison immediately insisted it was the Republican-led House’s fault. Hannity tried to call out President Obama for the massive debt, and Ellison fought back with a few suggestions for how Democrats want to lessen the debt, which Hannity practically laughed at.

As Hannity attempted to ask Ellison another question about the “immoral” debt, Ellison called Hannity immoral and accused him of telling lies. He insisted that the massive debt is not Obama’s fault, which led to a brief shouting match between the two men. Hannity cut Ellison off by telling him the interview was a “total waste of time.”