Dem Congressman: ‘I Love Obama’ But Syria Situation is ‘Embarrassing’ 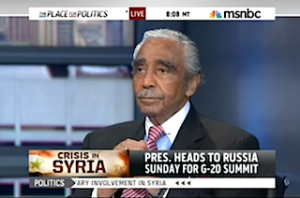 As President Obama heads into hearings on military intervention in Syria this week, he’s counting on support from his Democratic allies. But this morning on MSNBC, one typically loyal Democrat had some harsh words for the president. Rep. Charlie Rangel (D-NY) said he “loves” Obama, but has found his handling of the Syria situation “embarrassing.”

Responding to a question about Obama’s “red line” on Syria’s use of chemical weapons, Rangel said, “I love Obama, and you’ll never find a truer Democrat than me, but this whole idea of any president of the United States drawing lines saying that if any country does something, that he considers wrong, that the nation is going to war, it’s unheard of–drawing a red line. So, of course, it’s embarrassing. I wish it didn’t happen.”

He added that Secretary of State John Kerry must be “even more embarrassed than me” after making his strongly-worded speech calling for action on Friday. “I couldn’t see anything urgent about” Syrian intervention, Rangel said, “and I’m glad the president reviewed his thinking and he is going to give us time to discuss it.”

Rangel said his hope that that the international community comes up with a solution to the crisis in Syria “where we are not putting our kids in harm’s way to solve an international problem that we feel bounded, not by law, but because the president has drawn a red line.”