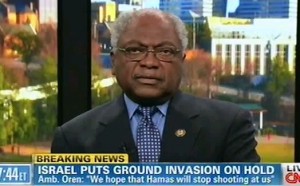 Democratic congressman James Clyburn appeared on CNN’s Starting Point earlier today to defend U.N. ambassador Susan Rice from criticism over her role in a possible cover-up following the attacks on a U.S. consulate in Benghazi. Soledad O’Brien specifically asked Clyburn about the tone of the attacks leveled at Rice. Clyburn said that Republicans have been using racial “code words” to attack Rice and have gone over the line in attacking her qualifications.

Dana Bash brought up the fact that al-Qaeda was removed from Rice’s talking points before she talked publicly about the attacks, asking Clyburn if he’s frustrated at the intelligence community for “hanging [her] out on a limb,” so to speak. Clyburn brought up the misguided attacks on Rice by John McCain and Lindsay Graham, and said Rice had absolutely nothing to do with the lack of security in Benghazi. He said if Rice had deviated from the talking points she was given, then he would have had some issue with what she did.

O’Brien jumped in to press Clyburn further on his frustrations with the Republicans. Clyburn seemed to take the letter signed by 97 GOP congressmen seriously, since it was circulated by one of his fellow South Carolinians and Rice herself has roots in Clyburn’s own district. O’Brien brought up comments by Congresswoman Marcia Fudge saying the criticism of Rice being incompetent and unqualified is so widespread because “they pick on women and minorities.” Clyburn shared roughly the same sentiment.

“These are code words. We heard them during the campaign. During this recent campaign, we heard Senator Sununu calling our president ‘lazy,’ ‘incompetent,’ these kinds of terms that those of us… we’ve been hearing these little words and phrases all of our lives, and we get insulted by them.”

Clyburn said it would be one thing for Rice to be criticized for doing something in error, but to attack her qualifications and competence is over the line. He added that Rice is being called incompetent by people “who can’t hold a candle to her intellectually,” and found it especially critical that McCain would call her incompetent when, as Clyburn pointed out, he thought Sarah Palin was a good choice for VP.