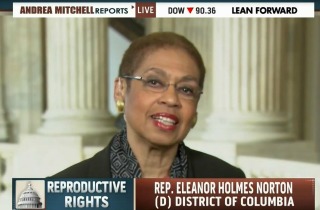 Democratic Congressional Delegate Eleanor Holmes Norton (D-D.C.) appeared on MSNBC on Monday where she declared a new bill working its way through the House of Representatives amounts to a declaration of a “new war on women.” She said she was denied the chance to speak at an all-male congressional hearing on a bill which would limit the use of public funds to provide abortion in the District of Columbia. Denouncing the bill, Norton said that the GOP “lost the war” but seem eager to fight it again.

“I took special issue with the hearing because I wanted to testify on a very small part of the hearing that does real damage to the District of Columbia,” Norton said. “Part of a larger bill that was the kickoff to the new war on women.”

She took exception to a number of provisions within the new bill which would extend the Hyde Amendment, which bans the use of public funds to pay for abortion with the exceptions of rape and incest, to beneficiaries of the Affordable Care Act.

“I’m seeing up there a bunch of males, you know, who want to pass judgment on women all over the country,” Norton added. “and want to keep the district from spending its own local funds on abortion for low income women the way women in 17 states do who declare that the District of Columbia for purposes of abortion shall be a part of the federal government.”

Norton concluded by specifically singling out Rep. Trent Franks (R-AZ) for criticism. “If he wants to start the war game this way, they lost the war last time and we have a new president to show for it,” she closed.

Watch the clip below via MNBC: