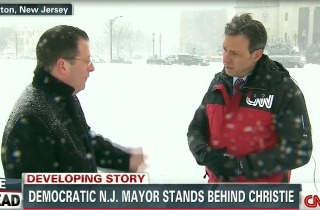 State senator and Union City Mayor Brian Stack appeared on CNN on Tuesday where he came out in support of New Jersey Gov. Chris Christie and said that he has been one of the “best” governors the state has ever had. He added that he thought the mayor of his city’s abutting city, Hoboken’s Dawn Zimmer, was making “far-fetched” allegations against Christie’s administration.

Stack said that Christie did “great” in his address on Tuesday marking his second inauguration as the Garden State governor.

“Has your confidence in him been shaken at all?” The Lead host Jake Tapper asked referencing the allegation surrounding the closure of the George Washington Bridge in 2013 and the claim that the governor’s administration threatened to withhold Hurricane Sandy aid from Hoboken.

RELATED: MSNBC Segment Gets Heated over Whether Christie Accusers Get Benefit of the Doubt

“I don’t believe the governor knew anything that was going on with the bridge, Jake,” Stack replied. “We all have staff members that sometimes do things that we’re not proud of.”

“As for Mayor Zimmer in Hoboken, I mean I just think the story is far-fetched,” he added. Stack said that his relationship with Christie has been “great” and that Trenton has “gone out of their way to be helpful” to him and his city’s residents.

Tapper suggested that Stack may have a better relationship with Christie because he is a political ally. Stack said that he supported former Gov. Jon Corzine for reelection in 2009. “That was a huge mistake,” he added. “He didn’t do anything. He was never responsive, being a fellow Democrat, he was never responsive.”

“As for being a governor, I think he’s been one of the best we’ve had in New Jersey,” Stack added.

Asked if he would support Christie in a bid for the White House in 2016, Stack said that he would “be inclined to support him.”