Dem Rep. Attacks Hobby Lobby for SCOTUS Case, Trying to ‘Impose a State Religion on Everybody’ 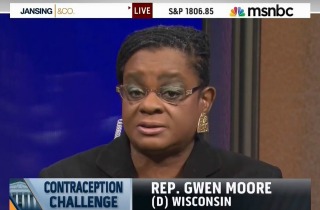 Rep. Gwen Moore (D-WI) expressed her concern on MSNBC on Wednesday about the potential implications for the country if the Supreme Court finds in favor of a variety of businesses, including Hobby Lobby, which has challenged the constitutionality of the Affordable Care Act’s contraception mandate. Moore attacked the chain for what she characterized as an effort to “impose a state religion on everybody.”

“I am very confident that the Supreme Court will rule on the side of women,” Moore told MSNBC anchor Richard Lui.

She added that the fact that the companies bringing the case, including Hobby Lobby, “says it all.”

“Motherhood is not a hobby,” Moore declared. “Women’s health is not some arts and craft.” She added that she does not believe these companies “should decide whether or not I’m going to be a mother.”

Moore said that estrogen supplements and other forms of birth control are also used often times to treat serious illnesses as well as prevent pregnancy. Lui clarified that Hobby Lobby in particular does not object to providing contraception coverage but specifically to abortifacients like the morning after pill.

He played a clip of Hobby Lobby’s founder and lawyer making the case that their religious faith should not be violated simply because of their profession or the size of their company. “What about freedom of religion, as they were talking about?” Lui asked.

“I think the notion of the First Amendment, and I’m not a lawyer, is that, you know, you don’t impose a state religion on everybody,” Moore said. “If I believe that at age 24, and I’ve got three kids, that I need to use birth control so I don’t have fourth, you can’t impose your religious beliefs on me, Hobby Lobby, that I ought to have a fourth or a fifth child because that’s what you believe.”