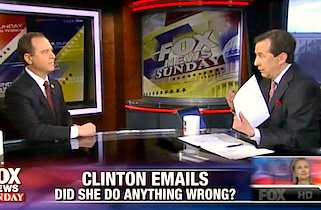 Fox News Sunday host Chris Wallace questioned Representative and member of the House Select Committee on Benghazi Adam Schiff (D-CA) Sunday morning over Secretary of State Hillary Clinton’s retention and deletion of emails from her time at the State Department.

Schiff argued that the committee would be just as outraged over Clinton’s emails had she delineated between personal and State Department email account. He further alleged that the focus on Clinton was entirely political and not part of the course of the investigation, as evidenced by the fact that committee had known about Clinton’s email account for some time but only became interested in them recently due to public pressure.

Wallace invoked OF-109, a document all State Department employees sign when leaving the agency pledging that they have turned over all documents under penalty of federal law. It is unknown whether Clinton signed the document, but “she clearly didn’t live up to this pledge,” Wallace said.

Schiff said he didn’t know whether she signed it, and suggested other Secretaries of State be asked as well. He also called it irrelevant to the committee’s investigation. “This committee has long since departed from being a committee about Benghazi,” he said. “It’s now a special investigation of Secretary of State Hillary Clinton. Otherwise, what possible reference does that form have for Benghazi?”