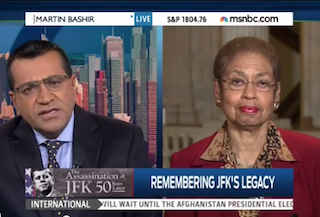 Delegate Eleanor Holmes Norton (D-DC) used an appearance on Martin Bashir‘s MSNBC show Friday to criticize Republicans for their “intransigence” on the Affordable Care Act. But she did it in a unique way: by equating the modern-day GOP with Southern Democrats during the Civil Rights Movement.

Bashir began by asking Norton, in light of the 50th anniversary of President John F. Kennedy’s assassination, how civil rights legislation would ever have been able to move forward under today’s congressional conditions. Instead of allowing a vote on immigration reform, Bashir said, House Speaker John Boehner (R-OH) “spends his time at his computer mocking” Obamacare “when we have 47 million people in this country who don’t have health insurance, we have over 11 million undocumented immigrants in this country.”

Norton indulged Bashir’s line of questioning, while at the same time reminding him that things weren’t so perfect back in the 1960s, and that then it was often Democrats standing in the way of change on civil rights issues. “The intransigence of Republicans today, particularly over issues that could be easily settled,” she said, “reminds me of the intransigence of the Southern Democrats, who refused to move on civil rights until they had to.”

She credited the 1963 March on Washington as not only “raising the hopes of Americans all over the country” but also forcing those Southern Democrats to take action on civil rights. “Only three months later,” she recalled, “John F. Kennedy was dead.”