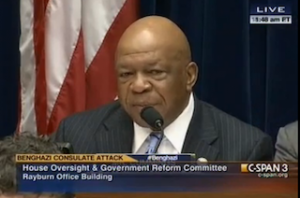 Rep. Elijah Cummings was the first Democratic member of Congress to speak during Wednesday’s hearing on last year’s attack on the U.S. consulate in Benghazi, Libya. Cummings did not waste any time before going after Chairman of the House Oversight and Government Reform Committee. Rep. Darrell Issa (R-CA), for what he believes was the congressman using the Benghazi attack for his own political gain.

Cummings began by thanking the witness, former diplomat Gregory Hicks for his service and offering condolences for the loss of his colleagues in the attack. “If I had been in your place,” Cummings said, “hearing Ambassador Stevens’ voice on the phone and wanting to do everything possible to help him, I would have had the same questions you had: where’s the military, where are the special forces, where are the fighter jets to rescue my colleagues? These are legitimate questions.”

But from there, Cummings proceeded challenged a series of theories about how the U.S. could have saved the four men who died in the attack; claiming that official sources have confirmed to him that under the circumstances, it would not have been possible for military help to arrive in time. “I have seen nothing to make me question the truthfulness of our nation’s military commanders,” Cummings said. And while he said the oversight committee has a duty to hear testimony from Hicks and his fellow whistleblowers, “we also have a duty to thoroughly investigate these claims before we make public accusations.”

Cummings decried the “full-scale media campaign” unleashed over the last few weeks “that is not designed to investigate what happened in a responsible and bipartisan way, but rather to launch unfounded accusations to smear public officials.” Cummings made it clear that he was “not questioning the motifs of our witnesses,” but rather “questioning the motives of those who want to use their statements for political purposes.”

Cummings continued, directing his attacks squarely at Rep. Issa, and accusing him of blaming the Obama administration for the attacks “for political reasons.” He read a laundry list of allegations Issa has made against President Obama, Hillary Clinton, Susan Rice and others and explained why they are simply “untrue.”