Dem Rep., Frustrated By Pace Of Gun Control, Lashes Out At Founders: System Designed ‘To Protect The Cowards’
video

Dem Rep., Frustrated By Pace Of Gun Control, Lashes Out At Founders: System Designed ‘To Protect The Cowards’ 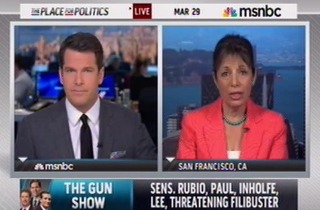 Democratic Rep. Jackie Speier (D-CA), a vocal proponent of stiff gun laws stemming from having been shot multiple times herself in Jonestown in 1978, appeared on MSNBC to express her frustration with the slow pace Congress has taken in enacting new gun laws in the wake of the Newtown massacre. Rather than attack her Republican colleagues for opposing gun laws, Speier lashed out at the design of the Constitution which she called a system “orchestrated to protect the cowards.”

MSNBC anchor Thomas Roberts asked Speier for her take on a statement issued by Sen. Ted Cruz (R-TX) who, on Thursday, criticized President Barack Obama for using the Newtown slayings “to promote an agenda that will do nothing to stop violent crime, but will undermine the constitutional rights of all law-abiding Americans.”

Roberts noted that some members of the Senate have indicated their willingness to filibuster new gun control laws. “How worried are you about that?” Roberts asked.

“I’m deeply concerned about it,” Speier said. “It makes me realize, once again, that the system is really orchestrated to protect the cowards in this country.”

“Everyone said it had to start in the Senate – that the [gun control] legislation had to be taken up in the Senate – Well, we all know that a filibuster requires only one person, and I feel that it’s been set up so that no one has to take a tough vote,” Speier said. “When 91 percent of Americans believe that there should be universal background checks, how can we not stand up and do the right thing?”