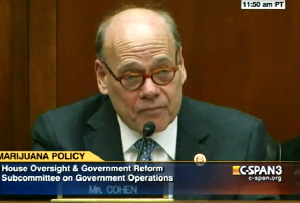 President Obama recently revived the debate over the War on Drugs when he said that marijuana is less dangerous than alcohol and got rather candid about the racial disparity of drug arrests. So Congress held a hearing Tuesday on marijuana policy, and to make a point about the harmful effects of certain drugs over others, Democratic congressman Steve Cohen invoked the death of actor Philip Seymour Hoffman, who was found with a needle in his arm on Sunday.

Under current laws, both heroin and marijuana are classified as Schedule I drugs. When it was Cohen’s turn to grill Michael Botticelli, the Deputy Director of the White House Office of National Drug Control Policy, he made it quite clear how crazy he thinks that is.

“It is ludicrous, absurd, crazy to have marijuana at the same level as heroin. Ask the late Philip Seymour Hoffman, if you could. Nobody dies from marijuana. People die from heroin. And every second that we spend in this country trying to enforce marijuana laws is a second we’re not enforcing heroin laws. And heroin and meth are the two drugs that are ravaging our country.”

He almost shouted that the government needs to put “total emphasis on the drugs that kill,” and while it would be preferable that young people didn’t do any drugs, “they are, and we need to make sure we keep them alive.”