Dem Rep. Jumps Out of Chair, Explodes at GOP’ers During Obamacare Hearing
video

Dem Rep. Jumps Out of Chair, Explodes at GOP’ers During Obamacare Hearing 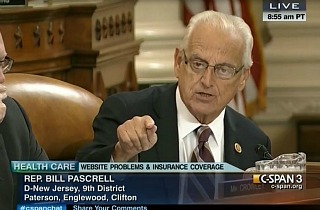 Rep. Bill Pascrell (D-NJ) rose from his seat on Tuesday during a congressional hearing into the Affordable Care Act’s problematic roll-out. He accused his Republican colleagues in the House of dishonestly seeking to identify the problems with the ACA because they would prefer to see it repealed entirely.

Pascrell began by insisting that, even though Democrats opposed Medicare Part D in the Bush Era, they worked to make sure that the program was a success.

He became animated as he said that Democrats put aside their opposition to Bush in order to make a policy objective work for the good of the American public. “And how many of you stood up to do that,” Pascrell said exploding out of his chair. “None. Zero.”

“What are you going to do about the approximately 17 million children with preexisting conditions who can no longer be denied health insurance coverage,” Pascrell asked his Republican colleagues. “We want to go back and want to say you are no longer covered any longer. Are you going to tell the parents of those kids?”

Pascrell blew up at Rep. Tim Griffin (R-AR) who insisted that the GOP has put forward a number of proposals to ensure that low-income people in need of care receive it.

“We’ve gone through 44 votes, 48 votes now of you trying to dismantle the legislation,” he concluded. “You call that cooperation?”