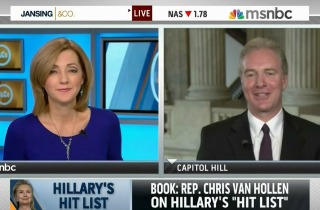 Appearing on MSNBC on Thursday to talk about President Barack Obama’s position on ongoing budget negotiations, Rep. Chris Van Hollen (D-MD) was asked by anchor Chris Jansing about the revelations surrounding Hillary Clinton’s “hit list” in which he was included. Van Hollen said that the list which singles out Democrats that did not support Clinton’s 2008 presidential bid, presuming it truly exists, was a “total mystery.”

“I have to say, it’s a total mystery to me,” Van Hollen told Jansing after being informed that he was on Clinton’s “hit list.”

“If this is true, and again I have just read the reports, it’s a mystery to me,” Van Hollen continued, “and I’d be interested in hearing what the basis of it would be.”

“Would you like to endorse her now?” Jansing asked.

He added, however, assuming the reports are “true,” that he would welcome a phone call from someone explaining the basis for his inclusion on Clinton’s list.