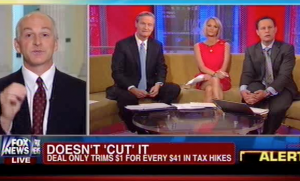 Congressman Adam Smith (D-WA) appeared on Fox & Friends on to discuss why he voted against the fiscal cliff deal that passed in the both the Senate and the House. When confronted with the criticism that many see lack of leadership on President Obama‘s part, Smith begged to differ.

Asked why he opposed the deal, Smith replied, “I am concerned about the long-term fiscal health of the country and concerned sequestration wasn’t dealt with.”

“I know this won’t be popular with your viewers,” he added, but “I’m concerned that revenue has been sort of taken off the table at this point.”

To that point, Steve Doocy asked about the originally proposed $250,000 tax cut threshold being hiked up to $450,000 — noting that some Democrats were “steamed.” Smith said he’s “concerned that the 250 level was set.”

“I’ve gotten 12 years worth of a lot of tax cuts,” he continued. “But if we’re going to support the programs going forward, I can’t keep getting that.”

Shifting gears a bit, Brian Kilmeade asked about Obama’s approach to the deal. “Are you concerned he’s pursuing his personal agenda and not the things that could solve our economy long term?” he asked.

Everyone likes to talk about the deficit, Smith argued, but when it comes to the actual choices and spending cuts, “there’s no support.” Following up, Doocy noted that many feel the president “really took no leadership when it comes to cutting spending with the budget and with this latest crisis.”

“I don’t actually agree with that,” Smith said, adding that Obama did put entitlement cuts on the table, as well as chained CPI. Kilmeade countered that the latter was a “nonstarter” among many Democrats. You can say he didn’t know leadership, Smith said, but “now what you’re saying is he showed leadership, but nobody else was willing to.” It’s hard to blame Obama, he asserted.

Adding to his point, he questioned what Speaker John Boehner and Republicans have specifically put on the table regarding cuts. When Kilmeade pointed to Paul Ryan’s plan, Smith countered that a budget is not an appropriations bill.

The hosts sparred back and forth with Smith over who offered more specific cuts. The segment ended in disagreement, with the congressman noting that he’s concerned with both revenue and long-term spending.