Senator Bashes GOP ‘Extremists’: Prepared to ‘Destroy’ Obama, Economy to Get Their Way! 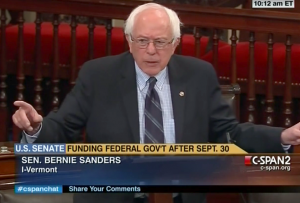 Independent Senator Bernie Sanderssaid on the Senate floor early Friday that debate over Obamacare is healthy, but “threatening to shut down the government” and dragging the country into an avoidable economic crisis is the wrong way to do it, calling out “right-wing extremists” pushing the U.S. down that road.

Sanders reminded his colleagues that Obamacare was passed by both the House and Senate, signed by the president, challenged by the Supreme Court, upheld by the Supreme Court, and the presidential candidate who ran on a platform of scrapping the health care law lost the election, so he didn’t understand why Republicans appear to be subverting the democratic process to get what they want.

Sanders implored his colleagues to think of all the people who could lose benefits during a government shutdown and brush aside the “small number of extreme right-wingers” who he claimed are “determined to try to destroy this president.”

Sanders went off on all the important economic issues the Senate should be debating, slamming the Republicans over the minimum wage and Citizens United, before concluding that “the one thing we should not be debating about is shutting down the United States government in order to achieve a narrow political goal.”