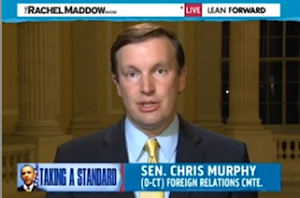 Wednesday night, Rachel Maddow spoke to one of the three Democrats to vote against the Senate Foreign Relations Committee’s Syria resolution earlier today. Sen. Chris Murphy (D-CT) told Maddow it was a “close call” for him, but ultimately he decided military action could make the situation in Syria “worse.”

“It was a close call for me,” Murphy said, “and when I talked to people back in Connecticut it’s a close call for many of them as well.” He said, “there is always a belief, a want, a need to believe that when there is a problem in the world that there is an American button we can press to solve it.”

“I really worry, the reason for my no vote today, is that one, I think that military action could perhaps actually make the situation worse, could just lend more chaos to an already volatile situation,” Murphy continued. “And second, today’s action not only committed us to a potential military strike, but also committed the Congress to supporting arming of the rebels. And those two actions together, I think bind us to this conflict for as long as it lasts.”

Murphy told Maddow that when he watches President Obama speak about the situation in Syria, “the look in his face reminded me of the look in his eyes when he came to Newtown shortly after that shooting. I know that he’s moved here, I know that the American people are moved. But, I think the reason why you see the American people lining up against this action, they’re wary of war, and they really question whether we can make the difference.”