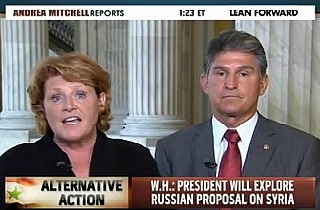 Appearing on MSNBC with Andrea Mitchell, Sens. Heidi Heitkamp (D-ND) and Joe Manchin (D-WV) explained their opposition to President Barack Obama’s push for intervention in the Syrian civil war. They expressed their hope that the so-called Russian solution may avert a crisis. When pressed about the lack of enforceability or accountability of the Russian plan, Heitkamp said that the U.S. was not trusting Syrian President Bashar al-Assad to make good on his word. “We’re trusting the Russians,” she explained.

“Why would you trust Assad,” Mitchell asked Heitkamp. “Assad has, until this initiative, denied there was an attack, denied he was part of it, denied he has chemical weapons. Why on earth would we trust this man to tell us he’s turned them all over to international monitoring and that he is signing a treaty that he’s never redesigned?”

“We’re not trusting Assad,” Heitkamp explained. “We’re trusting the Russians to come to the table…”

Manchin stepped in and clarified that the U.S. does not have a trusting relationship with Moscow, but the international community should back up the Russian proposal.