Dem. Strategist Fires Back At Cavuto For Cutting His Mic: ‘Do You Want To Deal With The Facts Or Not?’ 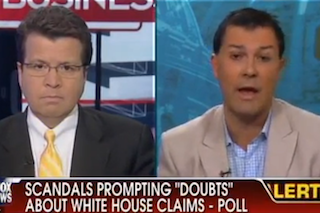 Democratic strategist Julian Epstein wrote an open letter to Fox News host Neil Cavuto for cutting his mic during an on-air argument Saturday morning, writing in the Huffington Post that Cavuto “owe[s] his viewers an apology.”

“Don’t play the politics thing,” Cavuto said on Saturday, after Epstein declined to see the NSA’s data-mining programs as part of the same behavior as the IRS scandal. “I’m telling you, drop the liberal thing and focus on the reality thing. You have one entity after another going after American people. You have one system of government, one agency, one department after another essentially doing the same thing. You can call that conflating. I am telling you there is a pattern.”

“You can’t conflate all these issues,” Epstein replied, at which point Cavuto lost his temper and told his producers to cut Epstein’s mic.

Monday morning found the Fox personality unapologetic. “These issues surround us,” Cavuto said, “and to minimize their threat or slope them off as individual incidents, each bearing no resemblance to the other, makes a mockery of us all. That is why I got angry. That is why I interrupted Julian, who is otherwise a friend. This is foolish, and that is why after repeated attempts to get him to shut up about making this a political discussion I simply decided to cut his mike.”

Epstein responded Thursday afternoon with a lengthy and detailed rebuttal, writing, “The differences between the NSA program, the IRS controversy, and the DOJ enforcement actions are so obvious that it’s hard see how anyone to anyone remotely familiar with the basic facts could, in good faith, confuse and lump them all together, or in your words, ‘connect the dots.'”

Epstein differentiated the IRS scandal—which he finds unacceptable, but wholly unrelated to the White House—and the Department of Justice’s subpoenas of phone records from the Associated Press and Fox News Washington correspondent James Rosen. The latter Epstein characterized as legitimate (in the case of AP) to possibly over-zealous (in the case of Rosen), but in both instances well within the bounds of the law, a law routinely supported by Republicans.

“These are the facts you would not allow me to share with your audience,” Epstein wrote. “Not because I was wrong—in the few moments you allowed me to speak, you made no concrete challenge to the facts I offered. And you did nothing to correct any of the demonstrably wrong statements made by nearly every other (conservative) guest on the show.”

“Amazingly,” Epstein continued, “when I pointed out that there is no evidence of any of this, you claimed I was the one being obnoxious, that I wasn’t dealing with facts and then dismissed any role on your part to referee basic facts, claiming that would be a ‘he-said, she-said.’ So I don’t get it—do you want to deal with the facts or not?”

Epstein also pointed out that his delineation between the IRS’ activities, which began in 2010, and the NSA surveillance, which is the continuation of Bush-era programs, had been made by numerous other Republicans, including, quite explicitly, by Bill Kristol on Sunday.

“This segment was (I thought) to be a serious argument about big, substantive issues—the role of government, the challenge of terrorism, and privacy in a digital age,” Epstein wrote. “And we all lose if even serious conservatives like yourself aren’t willing to have that debate on the merits, but would rather hide behind the most extreme rhetoric and unsupported, empty charges of lawless tyranny and police-state nonsense.”

Read the whole letter HERE, and watch the original segment below: