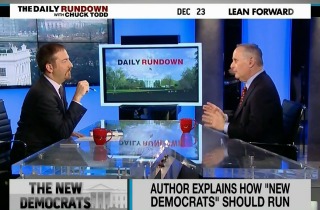 From told Todd that the Republican Party could benefit from a DLC of sorts because the group was so effective at restoring the public’s confidence in the ability of Democrats to lead in the late 1980s and early 1990s.

Todd asked about the burgeoning fights within the Democratic Party which seem to be setting up a familiar battle between the center and left wings of the party. He cited the struggle over a hike in the federal minimum wage and asked From if he believed this was the right thing for Democrats to be fighting for.

RELATED: Rothman: The Left and the Press Encouraging the Creation of a Liberal Tea Party

“I think that the minimum wage is an important fight that needs to be raised, but we have to be realistic, too,” From replied. “If, to me, the progressive position and liberal position is that no American who works full time year around to support a family ought to have a wage under the poverty level, even the numbers were talking about raising the minimum wage won’t get you there.”

“That’s why we have always support, and I believe we still need, a greater expansion of the earned income tax credit,” From continued.

He said that this targeted tax cut disproportionately benefits lower and middle class working Americans. He added that Democrats in the 1990s do not get enough credit for expanding access to that tax credit, which he said has been “the greatest anti-poverty program in the history of the country.”