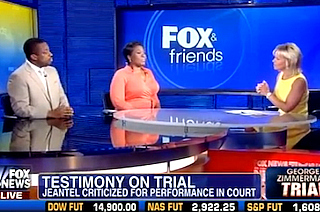 Fox and Friends’ Gretchen Carlson led a panel discussion Tuesday morning addressing the now-controversial speech of Rachel Jeantel, the chief witness for the prosecution in the George Zimmerman trial. Carlson took issue with linguist John McWhorter’s defense of Jeantel’s speech as an articulate use of “Black English,” and asked if such a description was “possibly offensive.”

“It’s not a language that’s gonna get you to graduate from high school, to go to college, to find a job, or to keep a job. We have to stop making excuses for this type of conversation that is happening in our communities. All too often we have leaders, like John McWhorter, talking about the history and talking about where it comes from, but like the slave trade, where this language is based from, it should be a thing of the past. It should be okay for people who have a platform, especially African Americans in the media who have a platform, to say this is unacceptable. This is not how our children should be learning. This is not the best way to move them forward”

“I assume you’ll take hits for saying that,” Carlson said.

“Absolutely,” Greene said. “Jesse Jackson did when he called it something like ‘garbage dialect.'”

“What about the whole thing becoming a side show?” Carlson asked. “It’s taking the attention away from what’s actually happening at the trial whether he’s guilty or innocent. Now we’re talk being the way she speaks.”

“A lot of people have been accused of being racist for addressing the way she speaks,” Greene said. “What [McWhorter] forgets is most of the people who went after her, many of those commentators on Twitter, were African Americans. So this whole conversation is also another way of just throwing the ‘r word’ out there. ‘He’s a racist, she’s a racist, you’re a racist.’ That shuts down conversation and we’re not going to proceed in dealing with racial anxiety, dealing with our implicit bias if we keep throwing that ‘r word’ out there.”

Panelist Brian Benjamin disagreed, noting that the criticism of Jeantel’s speech was being used to impugn her credibility on the stand. “She’s speaking the language she’s used to,” he said. “She grew up where she grew up and communicates the way she feels comfortable. The most important thing is she’s honest and telling the truth…To make the point that somehow because of the way she communicates, she’s somehow lesser than or is not a credible witness, I think is unfair.”