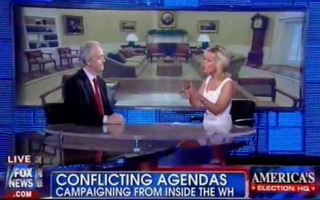 On Monday, Fox & Friends co-host Gretchen Carlson invited New York Post political columnist Michael Goodwin on to discuss the existence of President Obama’s “enemies list” as well as the President’s Osama bin Laden ad. Goodwin said that Obama has become much more of a “divider than a uniter” since his 2008 campaign.

Carlson asked Goodwin what he made of Kimberley Strassel’s column in the Wall Street Journal in which she exposed the Obama administration’s strategy of demonizing private citizens who donate to Mitt Romney’s presidential campaign. Goodwin replied that no president has had one since the infamous list composed by the Nixon administration. The subject turned toward Obama’s new ad that touts his administration’s killing of Osama bin Laden, which Goodwin said was “tasteless.”

Look, I think this president is desperate. I think he is demeaning the office. I mean, the Osama bin Laden ad that suggested ‘I killed Osama bin Laden and Mitt Romney wouldn’t.’ I mean, It is so distasteful. It is very much against what President Obama himself warned against – we don’t spike the football. That’s why he wouldn’t show the pictures of the corpse of Osama bin Laden. So to go out and use it in such a naked, political way I think is tasteless. People know that under his watch Osama bin Laden was brought to justice.

“It was such a great accomplishment, but it wasn’t even partisan,” said Carlson.

“And now it is,” Goodwin interjected.

Goodwin lamented that Obama had dropped much of the post-partisan rhetoric in 2008 and is today a much more divisive leader. When Carlson asked if Obama himself authorized the ad or if it was a staffer or surrogate, Goodwin replied that in many ways that distinction did not matter.

“If he didn’t authorize it, if he doesn’t like it, there is ample opportunity for him to say so,” said Goodwin. “We have to assume that he not only authorized it – that he likes it.”

I think that is in many ways just a classic example of what’s wrong with this presidency. He was supposed to unite the country, that’s why I voted for him. He said, ‘no red states, no blue states, the United States.’ We’re going to move beyond the partisan divisions. I think that is what this country desperately needs – it still does. Unfortunately, he has become much more of a divider than a uniter. He does things like this that I think drive a wedge down the middle of this country, which is why I think it makes it so hard to get anything done. Because, he’s not serious about getting things done. He’s only serious about campaigning.

Carlson asked Goodwin what his fellow Democrats are thinking – Goodwin said that there is a lack of trust among Democrats of the President.

“He’s not offering serious budgets. He’s offering talking points for his own reelection,” said Goodwin of Congressional Democrats forced to vote down two of the president’s offered budgets over the course of his first term. “We in the government, in the Congress, we have to actually vote on these things with the understanding that they might become law.”

Goodwin went on to list the economic problems facing the nation that Goodwin says Obama refuses to address, but is instead campaigning.