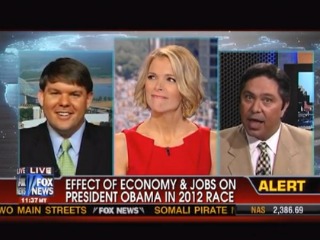 On America Live this afternoon, Megyn Kelly had conservative radio host Ben Ferguson and liberal radio talk show host Rob Thompson on to discuss how the current state of the job market and the economy will impact Barack Obama as he campaigns for a second term.

Ferguson critiqued Obama for not having a plan when it comes to dealing with unemployment, adding that he guesses Thompson must be privy to some “top secret information” the President is keeping from Congress. “Well, actually, I am on that top secret list,” Thompson joked, prompting Ferguson and Kelly to laughingly ask him to forward it along. He then went on to detail how the President listened to members of Congress who wanted to hold off on taxing the rich because, as job creators, they could funnel that money into creating employment opportunities. But, he noted, that hasn’t seemed to be working, noting Token Super Wealthy Person Warren Buffett‘s recent New York Times op-ed piece asking the government to stop “coddling” those in the highest income tax bracket.

Thompson continued to make his point when Kelly cut in with “Well, here’s the thing…” and a question for Ferguson. And that’s where things got interesting.

It’s unclear whether Thompson has some sort of technical issue and genuinely could not hear what Kelly or Ferguson were saying, or whether he simply elected to continue making his point, undaunted. An informal poll consisting of two Mediaite editors shows that 50 percent of everyone, ever believes Thompson could honestly not hear Kelly attempting to cut him off, with the remaining 50 percent opining that he simply wanted to finish making his point, come hell or high water or Ferguson’s distracting bangs. Kelly, eventually convinced that Thompson had no idea what she was saying, burst into a fit of laughter.

Either way, although [editorializing] I greatly admire Megyn Kelly and think she generally does a great job of keeping things balanced [/editorializing, ducks tomatoes and flaming maternity bras flying in from the comments section], she could have done a better job of allowing Thompson to respond to Ferguson’s critiques before moving in with another question for Ferguson, who, let’s face it, has an on-air presentation that is just ever so slightly more bombastic and dramatic than Thompson’s. (If Ferguson seems familiar, it might be because you’re remembering how he mocked Mitt Romney’s religious faith on a local news program.)

Have a look at the clip, courtesy of Fox News, and let us know your take. Was Kelly essentially “butting in” and not giving Thompson equal time? Do you think Thompson was being unfair by not allowing Kelly to ask Ferguson her question? Do you think he genuinely couldn’t hear what was going on? Should I get my hair cut like Megyn? So many questions: