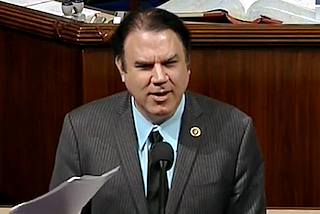 Grayson sought to bring a resolution declaring that the government shutdown had been a blight upon the dignity of the legislature, citing multiple polls that showed public opinion of Congress as worse than toenail fungus, hemorrhoids, and zombies.

But when he mentioned that Congress had a lower approval rating than “dog poop,” speaker pro tempore Steve Womack (R-AR) interjected and told him to keep his remarks confined to whether the question was privileged.

“A government shutdown is—and this is obvious, at this point—a mark upon the dignity of the House,” Grayson continued, “and the House should be willing to pass a clean continuing resolution to end it.” He added:

“If dignity means what is the dictionary says it means—the state or quality of being worthy of honor or respect—then surely the honor and worthy of honor or respect of this house has been called into question. When only seven out of 100 Americans approve of what we do, the lowest approval rating ever, then surely our dignity has been diminished and is actively being called into question. If we are to be called obstructionists, practicers of partisan petulance, if we are called an establishment that is rotten to the core, if we are leaving Americans wondering why there is so much poison in the system, then surely our dignity as a body has been diminished. If we’re accused of willingly provoking crises that suspend public services and decrease economic growth, then surely our dignity as a body has been diminished. If we cause international media outlets to refer to us as politically bankrupt and responsible for breaking America’s dignity, as a body, as a House, is being called into question—”

At this point, Womack cut him off with several dramatic gavel bangs. “The chair has heard enough,” Womack said.

There followed several minutes of argument, in which Womack said the chair had the discretion to recognize Grayson or not, and Grayson responded that Womack had already recognized him, as that’s why he was speaking in the first place.

Grayson never got his vote.

Watch the “dog poop” segment below, via C-SPAN:

…and Grayson being cut off for good: