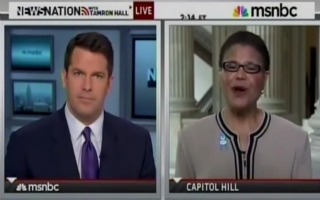 Democratic Rep. Karen Bass (D-CA) appeared on MSNBC on Tuesday where she said that Democrats opposed making cuts in programs like food stamps and the 2010 health care reform law in order to pay for programs that President Obama is proposing. Bass said that such cuts would be counterproductive in the long run because programs like food stamps creates “money that goes directly to small business” and stimulates the economy. Bass also said that the Republican compromise on freezing student loan rates amounts to asking students to either accept doubling rates or “forego your cancer screenings.”

MSNBC anchor Thomas Roberts asked Bass how she would defend criticism that Democrats are criticizing the Republican budget plan while not having even proposed one of their own.

“I do think that the Democrats have been very responsible,” responded Bass. “The President has put forward a budget that certainly I support.” She said that Democrats are willing to cut portions of the budget, but would only do so as long as it is part of a “balanced approach.”

Bass went on to say that she is wearing a blue ribbon in honor of “foster month,” and to raise awareness the Republicans are seeking to cut funding from foster care programs as well. “Cutting money to fosters on foster care month? Can’t go with that,” said Bass.

“I think it’s completely unacceptable to tell the youth of our country that if you don’t want your student loans to double, than you need to forego your cancer screenings,” said Bass.