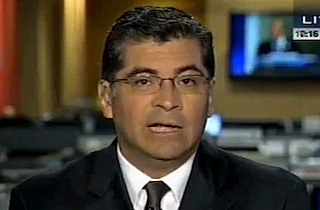 On C-SPAN’s Newsmakers Sunday morning, California Congressman Xavier Becerra commended President Barack Obama for seeking approval from Congress for a strike on Syria, but cautioned him against doing so if he does obtain congressional authorization.

If the resolution failed, however, Bacerra cautioned Obama against moving forward.

“Constitutionally, the president has the ability and the authority to act militarily if it’s not a war, and I don’t think he’s requesting authorization to commit us to war,” Bacerra said. “While he has the constitutional authority, morally I think he would have lost the authority to move forward…That’s why I hope my colleagues are up to the task of voting properly, appropriately, justly, morally, so we can decide what to do given that the president has asked us to join him, unlike other presidents who have never asked us to participate in this very difficult decision.”