Democrats Way Behind Usual Schedule on Debate Front — Here’s Why

Democrats Way Behind Usual Schedule on Debate Front — Here’s Why 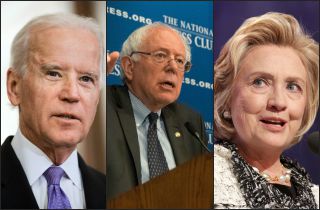 The party’s candidates are primarily old and white. It’s great hope is older than the once-inevitable-queen whom those that vote true blue desperately want to replace with someone, anyone but her. And those like Debbie Wasserman Schultz who run the party committee–who even some liberal commentators feel isn’t the brightest light on the porch–apparently don’t want any of them near a debate stage until it’s absolutely, positively necessary.

We’re talking, of course, about the current crop of Democrats vying to make it at least 12 straight years of control of the White House. Hillary Clinton is engaged in — and there’s no hyperbole here — about the worst campaign of any frontrunner in modern history. And if you disagree, ask yourself these questions: When was the last time Clinton had two good days in a row? Or a good day for that matter? Do we even know that the central theme of her campaign is? It’s an effort constantly on the defensive, lashing out conservative outlets like The New York Times and screaming about more right wing conspiracies that have nothing to do with decisions around home email servers, classified information or family foundation donations. And don’t bother blaming the media for focusing on the negative, only the completely blind partisans–and there are plenty around–can’t admit Hillary’s problems haven’t been completely unforced and self-induced.

Of course, there’s also the little issue of her being almost completely unlikable while lacking the all-important-genuine gene. Her former boss and competitor in the form of Barack Obama is likable and — at least as seasoned politicians go — is relatively genuine. Her husband is one of the most likable politicians of all-time. Trickle-down personality is something that Clinton is apparently immune to. Simply put, there’s just no real talent there… not the kind that gets you to 1600, anyway.

Her chief competitor (at least until Joe Biden jumps in to save the day) is Bernie Sanders… who also happens to be genuine and is arguably the most honest guy in politics right now. You may not agree with the message, but you can’t argue that Sanders is somehow attempting to spin anything… which is why he attracts huge crowds and polls higher than anyone could have ever predicted. As for Martin O’Malley, his candidacy is a non-starter, as is the man who wants to bring the Royale with Cheese to America via the metric system in Lincoln Chaffee. Jim Webb should be polling better but can’t seem to get a hint of airtime for the same reason 20 other candidates can’t attract any attention: The Trump/oxygen factor.

Lest anyone continue to argue that media isn’t more of a business than ever before: Trump gets eyeballs. He’s good for a few block-worthy soundbites a day that either infuriates or energizes depending on how you vote. That doesn’t only impact negatively GOP candidates looking to distinguish themselves from the pack, but those seeking attention seeking the Democratic nomination as well.

With all the attention Fox receives for the upcoming Thursday GOP debate — and rightly so since this will easily be the highest-rated cable news event ever — little has been said about the Democratic side of the house. Note: By this time during the last open election cycle in 2007, Democrats had already held five debates to this point. In 2004, there were 24 (yup, 24) debates before a nominee (John Kerry) was selected. In 2008, 27 (yup, 27) debates occurred. However, as The Daily Beast’s Eleanor Clift reports, the party will announce an initial debate schedule later this week to begin in the fall. Total amount scheduled this time around? Six…at the insistence of Team Clinton.

So what took so long? Get your popcorn ready, because here’s how Democratic strategist Anita Dunn explains it to Clift: Democrats didn’t have a declared candidate until May (Hillary Clinton), so the planning couldn’t begin until then. In other words, it apparently was difficult to simply come to the conclusion that a few people would be seeking the nomination (including Hillary, who has been raising millions via a Super PAC for over two years just not to run), so the party had to absolutely make sure there could even be a debate before putting together a schedule. It’s enough to make your hair hurt. But perhaps the DNC was waiting to see if a certain someone (See: Biden, Joseph, R.) gets in the race before officially setting said schedule.

Will rigorous discourse with the likes of Sanders be just what the doctor ordered for the Democratic frontrunner? If her performance during the campaign is any indication and the propensity to tell invalid truths any preview, the answer is obviously no. In the meantime, the GOP gets all the hype this week and will likely own the news cycle throughout August. Whether that’s a good or bad thing depends on the candidate.

For Trump, the numbers keep going up regardless of the gaffes or highly-questionable predictions. Like Biden, he’s teflon…just Donald being Donald like Joe being Joe (or Brett Favre being Brett Favre). John Kasich is about the only other GOP candidate making a move in a positive direction, while Marco Rubio has vanished and Jeb Bush hopelessly stalled. All of that changes Thursday night, of course. Or with that many candidates (ten) on one stage and only so much time for question and answer, maybe not much changes at all. Either way, the theatre of it all is a big part of the reason we follow this stuff.

Meanwhile, the Democrats wait to debate. Hillary being challenged by the candid likes of Sanders or by a tough debater like Biden (just ask Paul Ryan) will only result in the kind of chaos we’re already seeing on the GOP side.

The stage will finally be set by the DNC sometime after the NFL season kicks off, but you get the feeling top brass in the party would prefer to avoid the pesky process altogether.