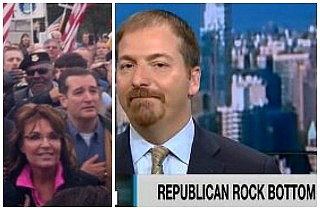 Sensing that public opinion is squarely on their side as the government shutdown continues and the nation careens toward a debt ceiling deadline, Democrats took the opportunity to up the ante over the weekend in negotiations with their Republican colleagues.

Having originally agreed to the mandatory budget cuts contained within sequester as the baseline for a clean budget resolution, some Democrats in Congress are now insisting that Republicans agree to partially restore some pre-sequester funding in order to secure a deal to end the shutdown and raise the nation’s borrowing limit.

For Republicans, this is a nonstarter. After days of hashing out incongruous bargaining positions between Democrats and Republicans, negotiations have been reset. As the debt ceiling deadline looms closer, the potential for a default looks more and more likely with each passing hour.

But for the press, which has spent the better part of the last month blaming Republicans for sticking with an unrealistic bargaining position – the defunding of the Affordable Care Act in the continuing resolution – the Democrats’ equally unrealistic and intransigent position is entirely justified.

What changed Congressional Democrats’ calculation in this standoff with the GOP that they would substantially raise the stakes at the last minute? Perhaps it could have something to do with a Wall Street Journal/NBC News poll released last Thursday night which was touted as being nothing short of apocalyptic for the GOP.

“Unmitigated political disaster,” “jaw-dropping numbers,” “the kind of numbers you only see once or twice in a lifetime.” These and other colorful descriptions were how NBC News Chief White House correspondent Chuck Todd depicted how the pollsters who conducted that earth-shattering survey viewed the results.

“If this were October, 2014 and not October, 2013, we’d be talking about a wave big enough to flip control of the House,” Todd said of the generic congressional ballot which showed voters preferring Democrats over Republicans by a substantial margin.

Todd was not alone in hyping the poll as the cue for Republicans to start panicking and for Democrats to press their advantage. Predictably, negotiations to end a standoff over the debt ceiling are now stalled.

Unsurprisingly though, the chorus of scolds in the media are not blaming the liberals in the Senate for proposing unrealistic goals. None of the columnists and reporters who excoriated the tea party Republicans in Congress for doing what their constituents wanted them to do are insisting that the Senate’s progressives are beholden to a “suicidal base.” Indeed, the recent movement away from consensus on the part of Democrats is being treated as an expected reaction to exogenous stimulus – as anticipated as the laws which govern Newtonian physics.

So, given that the Democrats are seeking to maximize their advantage over Republicans – a party which still controls the House and will need to be satisfied in order to end the shutdown standoff and increase the nation’s borrowing limit – one would expect the consensus-conscious members of the press to be admonishing Democrats for making a deal less likely with new demands at the last minute. Those expectations have proven to be unfounded.

Their very presence at the Memorial might be enough to justify this charge in the minds of many, but Todd cited more evidence to prove that the conservatives in the GOP are prolonging the standoff. Broadcasting images of unruly geriatric veterans, Todd reported that Cruz and Palin delivered speeches and held a march on the White House in which they were actively “fueling protesters who tore down barricades and carried them to the White House where they clashed with police.”

“Every time non-tea party Republicans want to complain about the treatment their getting from Democrats and the White House, they may only have these folks to blame,” the veteran Capitol Hill reporter added.

Palin is not in Congress and Cruz has lost so much credibility with his colleagues on the Hill that he has been effectively sidelined, and Congressional Democrats are no leading the charge to ensure that Republicans agree to surrender on unfavorable terms in order to end the shutdown and raise the debt ceiling. Nevertheless, in Todd’s estimation, it is Cruz and Palin who are making a deal less likely.

Summarizing the thoughts of Democrats in Congress over the weekend, Washington Post WonkBlog columnist Ezra Klein said that Congressional liberals “think it’s worth breaking GOP now and then seeing if that changes their negotiating position going forward.” 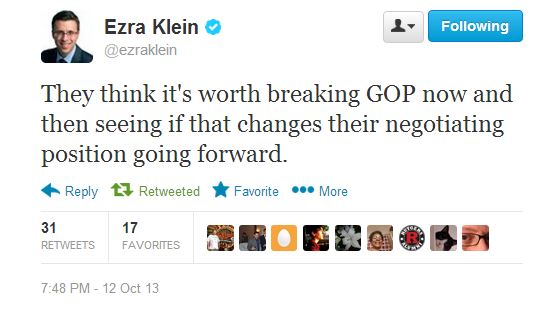 Apparently Todd does, too.