Denis Leary To Bill O’Reilly: 45% Of Americans Are “Deadweight” 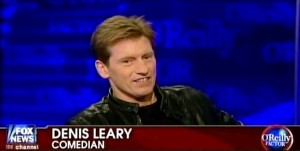 On The O’Reilly Factor, Bill O’Reilly welcomed author and comedian Denis Leary wondering why Leary hated America.  Although that opening salvo could have led to a volatile Factor shootout, what followed was a humorous give-and-take between the two who were clearly more interested in having a good time, as the most heated part of the interview came when they debated how long it would take for someone to finish Leary’s new book “Suck On This Year” while on the toilet.

O’Reilly disputed a quote from Leary’s book that Americans are so self-centered and uncaring about any interests other than their own, however, did agree that there is an unhealthy amount of narcissism in the country.  Leary stood by his statement and argued  that “we’re still the greatest country on the face of the planet, but we got a lot of deadweight.”  Ultimately, O’Reilly was convinced of Leary’s point as he jokingly concluded Americans “may be the dumbest people on Earth to spend 18 bucks on [Leary’s] book.”

Later when O’Reilly inquired whether Leary was a Matt Damon or Ben Affleck type of Boston liberal, Leary instead declared his politics were more in line with former President Kennedy.  “I believe in strong military and helping those below you, and if you’re balancing the budget and doing a good job as President you should be able to sleep with whoever you want.  That’s the Jack Kennedy approach to Democracy.”

Overall a fun comedic exchange that the “deadweight” in the country, and the rest of the Americans should both be able to enjoy.

Watch the clip below from Fox’s O’Reilly Factor: