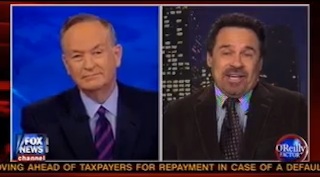 A few months ago, Dennis Miller offered an endorsement of Herman Cain in typical Miller fashion, asking his radio show audience if he could tell them “how jazzed I am about this guy?” However, following a number of gaffes on Cain’s part, Miller rescinded that endorsement last night on The O’Reilly Factor. He was blunter in his language this time, telling Bill O’Reilly that he was “off the Cain Train” simply because “he can’t win!”

The turning point for Miller seemed to be the now ubiquitous video of Cain’s less-than-inspiring Libya response. While Miller still felt that Cain was still a “great guy” and that he could change his mind back at some time in the future, he thought that video made it to easy for the opposition to “dust off the Palin playbook.”

O’Reilly asked who Miller was now looking at and Miller wasn’t sure.

“Well, listen, I don’t know where i’m quite going yet. I might stop at Newtville, I might go to planet Ron Paul. I have a feeling, like everybody else, I might end up at Romney Acres eventually. Those are the three right now, I think, because of this; Romney makes it hard for them to hit. Newt hits back. And Ron Paul doesn’t even know he has been hit.”

That being said, he seemed most confident about Newt Gingrich, citing the candidate’s strong debate performances and response to CBS’ Scott Pelley.

Watch all this from Fox News below as well as Miller’s story about “fantasizing” about elbowing a Muslim guy in the face on a plane because, hey, he’s still a comedian! What a hilarious jokester!