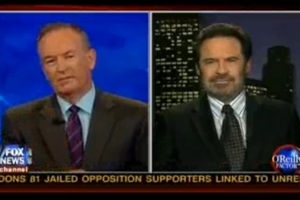 If last night’s “Miller Time” segment on the O’Reilly Factor proved anything, it’s that the current news cycle is finely tuned to bring out the best in Dennis Miller‘s sense of humor. He went one-on-one with Bill O’Reilly on a number of topics– the oil spill, the Joe Sestak job scandal, Sarah Palin‘s new neighbors– and not only managed to take a pretty hilarious stab at James Cameron, he got O’Reilly to use his best Cajun accent, too.

Miller disagreed with O’Reilly that it was too soon to attack President Barack Obama for not doing enough to stop the oil spill, accusing O’Reilly of “contorting.” “My observation is that presidents get blamed for stuff,” he argued, and Obama is getting away easy with insufficient action. He particularly mocked the invitation extended to director James Cameron to come help do “what? Go down and dilute the oil spill with insipid dialogue, or speak Na’vi to it?”

O’Reilly countered that he had better things to bash Obama on, like “the terrible deficit, for spending money wildly, for this crazy illegal alien stuff, for the trial of Khalid Sheikh Mohammed in New York City… I’m saving my ammo.” He then asked Miller what he thought of the rift in the Democratic Party about the reaction to the spill, spearheaded by CNN’s James Carville. For this, O’Reilly tried out his Cajun accent. It is exactly what you would imagine Bill O’Reilly’s Cajun accent would sound like. Miller was pithy on this issue: “I just think I’m he’s not my neighbor.”

Miller also took stabs at Bill Clinton and went off on “creep” Joe McGinniss for cozying up to the Palins. Video below: