Dennis Rodman Makes Big Papal Prediction: ‘One Of The Two Black Guys Are Going To Be The Pope’
VIDEO

Dennis Rodman Makes Big Papal Prediction: ‘One Of The Two Black Guys Are Going To Be The Pope’

Rodman Makes Papal Prediction: 'One Of The 2 Black Guys Are Going To Be The Pope'
Twitter share button 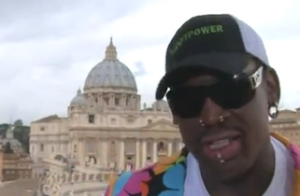 First Dennis Rodman tried to fix diplomatic relations between the United States and North Korea, now he’s trying to fix the Catholic Church. The former NBA player arrived in Vatican City Wednesday to see if there’s anything he can with his rediscovered celebrity power to help aid the papal conclave in their search for a new Pope.

Before he left, Rodman told TMZ “I want to be anywhere in the world that I’m needed … I want to spread a message of peace and love throughout the world.”

And to any media outlet in Vatican City that will listen, Rodman has been promoting the idea of an African-American Pope. In an interview with the Associated Press, Rodman said there’s “no question” that “one of the two black guys are going to be the Pope.” He was presumably referring to Cardinal Peter Turkson of Ghana and Cardinal Francis Arinze of Nigeria. Rodman insisted that “in our society, in the 21st century, there should be no surprise what’s going to happen.” Watch the AP interview below:

But in another interview with CBS News on St. Peter’s Square in Vatican City, Rodman revealed the real reason behind his campaign. He said he was in Rome on behalf of gambling website PaddyPower.com, which has set up a market for users to bet on the new Pope. “If he’s black, you get your money back,” Rodman said. He said that he is not betting on the papal conclave’s decision personally, but he his supporting the site’s “Yes We Vati-can” promotion, in which bettors get a refund if the cardinals elect a black Pope. 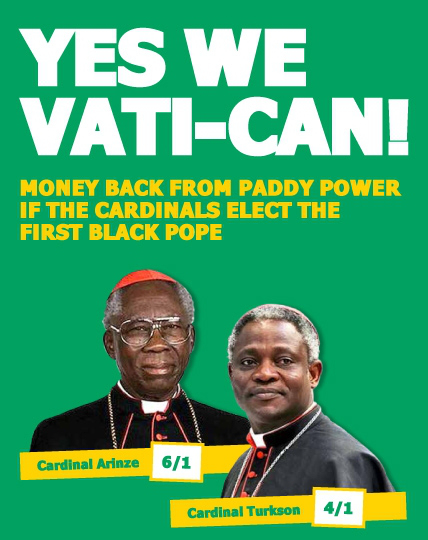