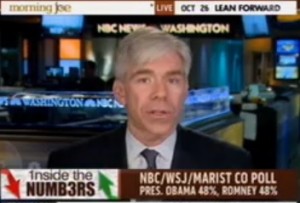 On Friday’s Morning Joe, Meet The Press host David Gregory stumbled badly in his assessment of senate candidate Richard Mourdock‘s (R-IN) comments on rape and abortion, and their relationship to Republican presidential candidate Mitt Romney. Gov. Romney has been furiously avoiding questions about his continued support for Mourdock, which Gregory described as merely “an association issue,” but aside from Gregory’s unsupported subjective judgment, he made a glaring factual error when he told the Morning Joe panel that, with regard to abortion, “you didn’t see it in the debates, except for the Vice President talking about the Supreme Court.”

Indiana U.S. Senate candidate Richard Mourdock, whom Mitt Romney has endorsed, reignited a firestorm when he said, in a debate, that pregnancies resulting from rape are something that “God intended to happen.”

Since then. Governor Romney has remained silent on the issue, while his campaign issued a statement saying that the candidate “disagrees” with Mourdock, but continues to support his bid for U.S. Senate. In discussing the effect of the Mourdock controversy on the polling gender gap, framed by Donnie Deutsch as “an emotional issue,” Gregory opined that “I think the Mourdock issue is much more of an association issue.”

What David Gregory fails to recognize is that this is not some sort of 6 Degrees of Kevin Bacon “gotcha” campaign against Mitt Romney, but a stark mirror of his own ticket. Romney’s own running mate, Rep. Paul Ryan (R-WI), holds exactly the same views on rape and abortion, would enact exactly the same policy were he given the opportunity. How could Gregory not know this? Is Paul Ryan craftily hiding his position?

Gregory sort of answers that question in the next breath, when he says, of the abortion issue, “you didn’t see it in the debates, except for the Vice President talking about the Supreme Court, the issue of Roe v. Wade and how it can influence that with the Supreme Court nominees.”

It doesn’t seem possible that David Gregory didn’t watch the very debate he’s referring to, but how else do you explain the fact that he forgot about this?

Vice President Joe Biden correctly said that Paul Ryan has “argued that in the case of rape or incest, it would be a crime to engage in having an abortion,” and Ryan’s response was “All I’m saying is, if you believe that life begins at conception, that, therefore, doesn’t change the definition of life.”

The other distinction that Ryan makes, between principle and policy, is important as well, because the principle that Ryan and Mourdock espouse, that rape is just another method of conception, is one that Mitt Romney shares. He has repeatedly expressed enthusiastic support for banning all abortions (and IVF, and most birth control), and made clear that the only reason he doesn’t make this a policy goal is because “that’s not where America is.”

Romney’s evasions on reproductive health have been abetted by a mainstream media of David Gregorys who refuse to pinn him down with simple questions like “While you have said that you won’t pursue it, would you veto legislation that banned abortions without exception?”

That same mainstream media has also failed to explain that Romney’s credibility on rape exceptions, and Ryan’s forcible birth policy waiting in the on-deck circle, are rendered moot by Romney’s promise to appoint justices who will overturn Roe v. Wade. When that happens, the Supreme Court will not be able to codify any such exception, and that decision will be left to states controlled by the likes of Richard Mourdock, Todd Akin, Roger Rivard, and the rest of the murderer’s row of Republicans that Rachel Maddow called out on her show last night. Forcing women to give birth to their rapists’ babies is not some far-out notion of the fringe right, it is the official position of the Republican Party, and if Mitt Romney is elected, it will happen. Regardless of how you feel about that, David Gregory owes it to the public he serves to make sure they know it.