Dershowitz: No Jury Would Convict Zimmerman Of Murder Unless Afraid ‘New Black Panthers Might Kill Them’ 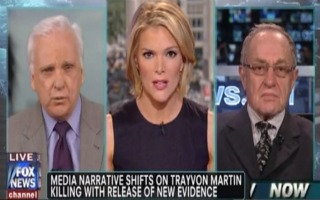 On Friday, legal scholar and criminal defense attorney Alan Dershowitz joined journalist and author Bernie Goldberg on Fox News Channel’s America Live with Megyn Kelly to discuss the ongoing trial of George Zimmerman for the murder of Florida teen Trayvon Martin. Dershowitz and Goldberg said that the New York Times and Florida prosecutor Angela Cory had irresponsibly furthered a narrative of Zimmerman’s guilt when it appears that he acted in a manner consistent with self-defense.

Dershowitz, who had previously been highly critical of the decision to indict Zimmerman for second degree murder, doubled down on his criticism and included some media organizations for hyping the case.

Dershowitz said that Cory, who handed down the Zimmerman indictment without the input of a grand jury, “raised expectations by politically indicting Zimmerman for second degree murder when there was never any basis.”

He went on to say that the media has largely changed their tune on the facts of the case, with the notable exception of the New York Times.

The New York Times still reports as if the evidence is overwhelming that Zimmerman is guilty. Indeed, they end a story in today’s newspaper shockingly by quoting an unnamed source that made a phone call to police alleging that Zimmerman may have some racist tendencies. That violates the Times own policy about sourcing. They would never have written such a statement about an un-sourced allegation by an unnamed person regarding Trayvon Martin. The Times has a position on this case, and it allows that position to influence its reporting.

Kelly asked Goldberg why the media was so invested in Zimmerman’s guilt. Goldberg said that the storyline fit neatly into a “liberal media” narrative of persistent white racism against African Americans. He said that a number of individuals employed irresponsible hyperbole when discussing the details of this case before it went to trial.

Goldberg said that the Times had also employed the description of Zimmerman as a “white Hispanic” to further the narrative that the alleged killer of Trayvon Martin was a white person. He said that if it was simply a Hispanic, the Times would have thought “that wouldn’t be interesting.”

Dershowitz took exception to Goldberg’s characterization of the problem of reporting around the Martin killing as being a liberal vs. conservative issue.

“I’m a liberal,” said Dershowitz. “I know that the evidence seems to corroborate much of Zimmerman’s story.”

Dershowitz concluded by levying harsh criticism of Florida’s law enforcement and agreed with Goldberg that this indictment was handed down in part because of the irrational media coverage of this incident. Dershowitz went further and said that Cory helped to create the hysteria.

She was appointed to stop race riots. That was her job. And as she put it, to do justice to Trayvon Martin. Not to do justice to George Zimmerman, not to do justice period. Just to do justice to the alleged victim in this case. She has a terrible reputation in Florida for always over-charging, and she was picked specifically for that… No jury – except one frightened that the New Black Panthers might kill them if they vote for an acquittal or that they might cause race riots – no fair jury would find anyone guiltily here of second degree murder.