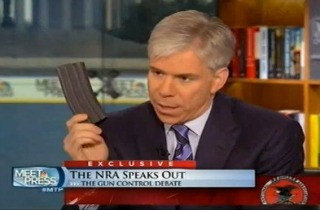 The Washington D.C. Attorney General’s office has released a statement in which they have declined to press charges against NBC News’ Meet the Press anchor David Gregory for a December 23, 2012, infraction in which he displayed an extended capacity magazine on national television. The Office of the Attorney General (OAG) says that, “despite the clarity of the violation of this important law,” and NBC’s “feeble and unsatisfactory” attempts to exonerate Gregory, they have declined to prosecute the violation.

OAG has made this determination, despite the clarity of the violation of this important law, because under all of the circumstances here a prosecution would not promote public safety in the District of Columbia nor serve the best interests of the people of the District to whom this office owes its trust.

“No specific intent is required for this violation, and ignorance of the law or even confusion about it is no defense,” the statement read. “We therefore did not rely in making our judgment on the feeble and unsatisfactory efforts that NBC made to determine whether or not it was lawful to possess, display and broadcast this large capacity magazine as a means of fostering the public policy debate.”

The OAG’s decision not to press charges was one, they say, was not made “lightly or easily.” They warn, however, that any repetition of this violation “will be prosecuted to the full extend supported by facts and the law.”

Read the full OAG statement below, via Legal Insurrection: