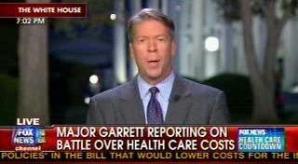 A little less than a week after Mediaite confirmed from Fox News that Major Garrett would interview Pres. Barack Obama in China, then the White House essentially denied, we now know that yes – the interview is taking place.

After months of tension between the two sides, this could be a sign of a new era. But let’s not overplay the olive branch – four other networks get the interview as well.

Garrett tweeted the news this morning: “I will interview POTUS on camera Wed am here in Beijing. 4 other networks will too. 10 mins per. Many had asked. Can say now.” It was later confirmed on the White House blog on Foxnews.com.

So Garrett’s interview will be far from exclusive – he’ll be one of five White House correspondents conducting interviews tonight in China: ABC’s Jake Tapper, CBS’ Chip Reid, CNN’s Ed Henry and NBC’s Chuck Todd. In other words: the White House is sticking with the pool this time. (Remember that backstory?)

While this is a big step forward in the mending relationship between the White House and Fox News, this is very much the expected first route. Will Pres. Obama sit for an interview with one of the opinion guys (Bill O’Reilly would probably be the most obvious choice) or give Fox an opportunity to make their own news, with an exclusive Sunday show interview? We’ll see how it progresses, likely as we look toward the beginning of 2010.

With the interview taking place overnight, expect the first clips to show up on Fox & Friends, and likely air throughout the day tomorrow.