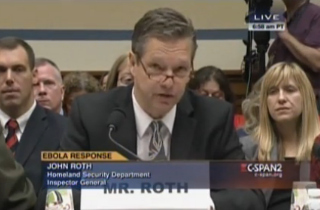 Nothing like testimony from a federal agency’s inspector general to make you lose faith that government can manage anything without wastefulness and disorganization.

Department of Homeland Security IG John Roth spoke Friday morning before the House Oversight Committee’s hearing on a multi-agency Ebola response. He recounted the findings of an August 2014 audit of the department’s pandemic preparedness efforts, and boy does it not look good for the bureaucrats.

First some background, as explained by Roth:

In 2006, Congress appropriated $47 million in supplemental funding to DHS to plan, train, and prepare for a potential pandemic. As a result, that year DHS began efforts to develop contingency plans and preparedness to be able to protect DHS personnel who may become exposed in a pandemic. Using the appropriated supplemental funding, DHS has acquired, stockpiled, and maintained protective equipment and antiviral drugs at departmental and component levels in preparation for a pandemic response.

So how’d that program turn out, according to Roth’s audit?

Oof. Roth noted that DHS has “concurred” with the audit’s 11 recommendations and has begun to take action on one of them. You can read the audit documents below.

Watch the testimony, via C-SPAN2:

And read the full audit document below: