Diane Sawyer, In A Word: Smooth 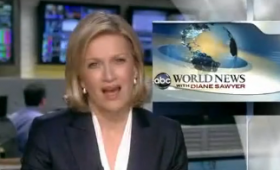 So I am not at all surprised that last night’s transition to new ABC World News-anchordom went so smoothly. It’s not like she hasn’t done it before, she has — all of it, actually. She’s done the hard-hitting interviews (hello, Mahmoud!) and the chatting with correspondents and the personal — but completely professional — nod at the end, with a compeltely appropriate smile, easily transitioned into her anchorly sign-off.

There were new graphics, of course, marking the (once) sea-change of the handoff from anchor to anchor — yes this is ABC World News with Diane Sawyer — but it was so less jarring than it has ever been. Perhaps because it seems like Diane has always been there (in some capacity, she almost has) and perhaps, as Twitter snobs may say, who takes that chair (or that chair) no longer matters (as much)…or perhaps it’s because Diane Sawyer is such a pro, and is so damn smooth. Whatever it was, last night’s transition went off, well, smoothly.

Here’s the video of her opening and closing, with a little chat with her GMA replacement George Stephanopoulos in between.

Also, there was something else important about Diane Sawyer’s taking over the anchor chair last night…let’s see, what was it again…oh yes, I remember: 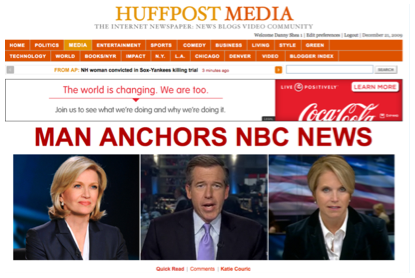 Haaaaaaa. Hat tip: Danny Shea at HuffPo, in a front page for the ages.