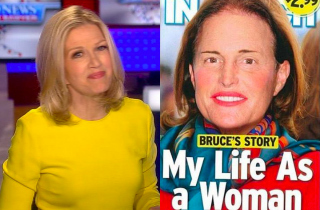 Diane Sawyer, who left her role as anchor of ABC World News Tonight last year to pursue big one-off interviews, and she may just have one with reality TV star and former Olympian Bruce Jenner.

In the weeks since In Touch magazine Photoshopped make-up on Jenner’s face to illustrate its story about his alleged transition from male to female, more and more gossip magazine and websites have been reporting the same.

Now, multiple sources, including the New York Post’s Page Six and BuzzFeed, are reporting that Sawyer will conduct the first interview with Jenner about coming out as transgender for ABC News.

Filming for the special is reportedly starting this week, but it is not set to air until May, indicating that it could be meant to reveal the fully-transitioned star of Keeping Up with the Kardashians. Jenner is also planning to appear in a docuseries for E!, which produces the aforementioned reality show. “That E!’s corporate sibling NBC News seemingly will not be landing the Jenner sitdown has caused internal consternation in the news division, as its booking war with ABC News continues to cause strife,” BuzzFeed’s Kate Aurthur wrote.

Asked about her former step-father’s situation, Kim Kardashian recently told Entertainment Tonight, “I think everyone goes through things in life and I think that story and what Bruce is going through, I think he’ll share whenever the time is right. I feel like that’s his journey to talk about.”