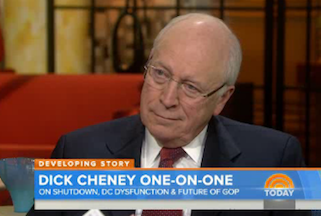 , Cheney also shared some unexpected sentiments about the tea party wing of the Republican Party.

In the increasingly evident civil war between “establishment” and “tea party” Republicans, Cheney would seem to fall squarely in the former camp. But in a conversation with Today’s Savannah Guthrie, he offered up a strong defense of the latter. Cheney rejected the idea of a “real rift” in the party, saying, “There are times when there’s a new wave, if you will, a new generation of political leaders coming along. The year I got elected in 1978 we had a guy named Newt Gingrich who kept telling everybody we could become the majority, and he was right.” He added, “The most radical operator in Washington today is the president.”

Cheney said he still believes the tea party has a “positive influence” on the GOP. “It’s an uprising, in part, and the good thing is it’s taken place within the Republican Party,” he said. “I don’t see it as a negative. I think it’s much better to have that kind of ferment and turmoil and change in the Republican Party than it would be to have it outside.”

He would not go so far as to call himself a “card-carrying member” of the tea party, but did praise those who do. “These are Americans,” he said. “They’re loyal, they’re patriotic and taxpayers, and they’re fed up with what they see happening in Washington. I think it’s a normal, healthy reaction and the fact that the party is having to adjust to it is positive.”

One of the reasons the former vice president may be opening up to the tea party philosophy may have to do with his daughter Liz Cheney, who is challenging Republican incumbent Mike Enzi in next year’s Senate primary. He even went so far as to compare his daughter to tea party hero Sen. Ted Cruz (R-TX). “I think he represents the thinking of an awful lot of people obviously in Texas,” Cheney said of Cruz. “But my own daughter is running for U.S. Senate in Wyoming partly motivated by the concern that Washington is not working, the system is breaking down and it’s time for new leadership.”

Cheney admitted that the best thing he can do for his daughter’s campaign in Wyoming is “stay out of the way.”