Dick Cheney Opens Up About Cardiac Arrests, Terrorist Threat to His Heart
video

Dick Cheney Opens Up About Cardiac Arrests, Terrorist Threat to His Heart 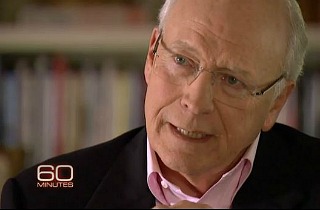 Former Vice President Dick Cheney sat down for a wide-ranging interview with CBS’ 60 Minutes on Sunday where he discussed his new book, Heart. Cheney revealed that he was a seriously ill person before he had a heart transplant surgery 20 months ago. He told Sanjay Gupta that he had a specially designed defibrillator implanted in his chest to prevent terrorists from hacking the device and attempting to kill him.

“I was aware of the danger,” Cheney said of a potential plot to attack his medical implant. “I found it credible.”

Gupta asked about a recent episode of the Showtime program Homeland which featured a depiction of a similar attack on a medical device. “I know from the experience we had and the necessity for adjusting my own device, that it was an accurate portrayal of what was possible,” Cheney said of the show.

Cheney revealed that he was shown the terrifying results of a recent blood test on the morning of September 11, 2001 which showed potentially fatal levels of potassium in his blood.

“I didn’t think about my health. I was thinking about the problem we were dealing with,” Cheney said.

Asked if he ever worried about his physical health impacting his mental health or ability to perform in the office of the vice presidency, Cheney replied that he never did.

“I was as good as I could be given the fact that I was 60-some years old at that point and a heart patient,” Cheney said.

Watch the interview below via CBS: