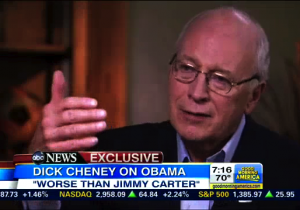 Good Morning America aired more of the exclusive interview with former Vice President Dick Cheney this morning. After addressing his personal health, Cheney started to talk politics, with ABC News’ Jonathan Karl asking Cheney for his take on President Obama. Cheney gave Obama some credit for his foreign policy, but overall agreed that Obama is a worse president than Jimmy Carter.

Cheney said he is “not a big fan” of the current president, calling him one of the “weakest” leaders in the nation’s history and saying he has not disagreed more with any Democratic president. Karl asked Cheney if this meant Obama was, in his opinion, “worse than Jimmy Carter.” Cheney agreed.

When Karl pressed Cheney on Obama’s foreign policy, the former vice president acknowledged that Obama has not necessarily been “soft on terror,” he has made a number of mistakes. Cheney also claimed that much of the intelligence connected to the mission to take out Osama bin Laden was gathered during the Bush administration.

The conversation then turned to social issues, and Karl asked Cheney if he wished he had done more during his eight years in office to push for gay marriage. Cheney explained that he made his position clear in his 2000 debate with Joe Lieberman and did not feel he needed to say more about it afterwards.

Following the interview, Karl revealed that Cheney will not be attending the Republican National Convention in Tampa, opting to go fishing instead. This means that neither the last Republican president nor vice president will be at the party convention next month.